Long walks / pilgrimages of the world

I have discovered that walking is one of the most powerful ways for me to truly experience a country and its people - the longer the better. I love the simplicity of life, the experience of community with other long distance hikers and the spiritual journey. There is an incredible freedom that comes with choosing to pare back ones possessions (as Peace Pilgrim said "Anything that you own that you don't absolutely need is a burden." and this becomes very evident when you have to carry it on your back day after day). I will gradually expand this list as I discover more long walks in different countries... 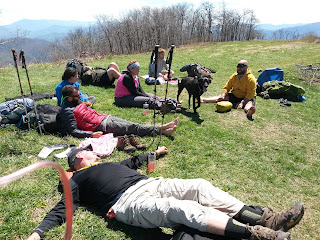 Generally, all tracks require you to be self sufficient, with food, tent, maps and compass and good navigation and survival skills. Trails may be unmarked and/or overgrown in areas. Long tracks go through remote country. You will often need to arrange food drops in advance and be very aware of water resupply opportunities.
Costs: You will usually require camping permits for national parks you pass through at about USD$3/day plus food costs. Also, arranging food drops can be a significant cost, depending on how remote they are.

Te Araroa - 3000km route from Cape Reinga in the North of New Zealand to Bluff in the South
New Zealand's Trail. Takes in spectacular New Zealand landscapes, from beaches to volcanoes to forests to cities.

Walking the Appalachian trail transformed my view (positively) of the USA. I reckon it's the best country for long distance walking, in nature. Locals are friendly and supportive. It's often possible to resupply on route by hitching a short distance off the trail.
Costs: Generally, there are no fees or permits required on for thru hikers on the long trails but check first. So, all you will need to spend money on is food and replacing worn gear (eg shoes) and an occasional hostel if you want to take a break off the trail and have a shower. Budget about USD$10/day if you are doing a full long trail.

Bruce Trail - 850km from Niagara to Tobermory, with side trails extending out to 250km.

Shikoku Pilgrimage - 1,400km Accommodation in small, family-owned inns for 4,000-8,000 yen per night (depending on if you’d like food with your stay).

Cotswold Way - 162km from Chipping Campden in the north to the city of Bath, a UNESCO World Heritage site.

Wikipedia has an extensive list of long distance trails by country.
Posted by chrisg at 06:53

We live in a time of dramatic change. Never before have the challenges been so great. And never before have ordinary people had so much power to change the world. May we act to bring about a world of true compassion, deep sharing and joyous diversity.
I use this blog mostly as an online repository of information and resources that I have gathered for various reasons. Rather than leaving things on my computer I thought I'd stick them here - hence, the strange mix.

I am passionate about social justice, simple living, bush-walking, cultures of the world and village life and I am currently on a global pilgrimage: sometimes walking for hundreds of kilometres, sometimes helping community organisations in areas such as: facilitation, strategic planning, building an effective online presence or getting a volunteer program set up, and sometimes doing blind trust experiments with free hugs.